Skip to content
We here at Modus were delighted to see Orlando’s WKMG spotlight Thundershirt’s awesome product in a recent story. We’re also proud to say that in their tests, Thundershirt was shown to calm down an American Bulldog mix. As anyone who’s watched cartoons knows, Bulldogs are tough customers. Check it out here! 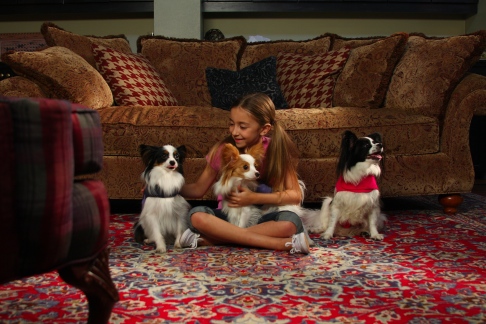 The launch of Thundershirt’s new branded direct response creative is set for October 22nd. The shoot took place over five days, with two days in studio and three on location (and some VERY early mornings). Emphasizing real customers and true success stories shot in an infinity environment, the new creative continues to elevate Thundershirt’s brand presentation. We are beyond proud of Thundershirt’s evolution both into a household name, as well as the spot it’s earned as the gold standard in the market.

It’s no secret that at Modus Direct we don’t just engineer savvy and successful DRTV campaigns: We’re also a big bunch of softies. Especially when it comes to our four-legged friends. Jean Rebel, our Associate Media Director, recently discovered a fabulous resource for local animals in need and those who love them, Kickapoo Rescue.

“After my Maltese, Herbert, passed, my veterinarian suggested I foster or adopt a dog from Kickapoo Rescue”, Jean explained.  “I was very upset on Herbert’s passing and originally said ‘No’… but the house was so quiet and lonely without Herbert that I gave in”

And whom did Jean end up taking home? Certainly not your run-of-the-puppy-mill kind of dog.  Jean recalls how her heart was stolen by, “Miss Sassafras” (Sassy for short). “She’s a 12 year–old Chihuahua, Miniature Pincher mix. She was blind with no hair around her neck and her trachea was pushed in. Kathy (who runs Kickapoo Rescue) found her in a concrete cell with a big dog who would pick her up and throw her around. She had horrible dandruff due to poor diet, was underweight and had three broken ribs. I was sitting on the floor and she walked over to me and kissed my hand. I picked her up, her tail wagged, I lost my heart to her and the rest is history”

Sassy’s not just Jean’s pet, but part of the extended Modus family. “In large part, one of the reasons Sassy became so well adjusted after her rescue was me being able to bring her to work a few days a week. Everyone at the office is very kind to her and she really enjoys being here with them. Not to mention it makes me extremely happy when she is here”

You can find out more about Kickapoo Rescue and how you can get involved in supporting this great organization by visiting their website here.

Modus likes animals, especially those with attitudes. Here are some great shots, courtesy of Huffington Post,  of our fuzzy pals making the most of a dog’s (or cat’s) life.

Modus Direct client Thundershirt is very excited to announce the release of another great addition to their rapidly expanding product line…the new Polo! The polo works just the same as the original Thundershirt, providing jittery pets with an ongoing, soothing “hug” from the snug fitting garment…with a little flash of style.

Yes, Dog TV. A new cable network will soon launch aimed specifically at… Dogs. The idea being keeping the TV on for your pooch while you’re out and about will help them feel less lonely or bored. The “shows” will be segments around three to six minutes long, showing images of natural settings, dogs being loved by humans, doggie toys, etc.

We better get cracking on a Thundershirt campaign that sells directly to the wearers!

Cat anxiety is real, too! On April 23, Thundershirt announced the launch of the feline version of Thundershirt. Now cat owners also have an innovative, drug-free way to calm their nervous pets. Like their canine counterparts, kitties face their share of stressors in any given day: travel, vacuum cleaners, separation anxiety (ahem, Dogs) and so on.

Thundershirt for cats works on the same principle as the original Thundershirt: the product wraps around the animal’s torso, providing constant yet gentle pressure; essentially simulating a hug. The effect is to calm and soothe our fuzzy friends, leaving both owner and critter happy and relaxed.

Take a moment to check out the Southeastern Guide Dogs website. These folks are located just two blocks away from us. The folks on both two and four legs over there provide an amazing service to the community.

Check out their site here.